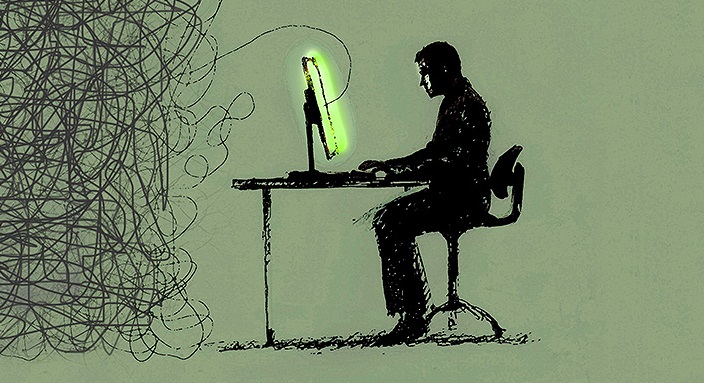 Did you know that 20th October was Information Overload Day? Perhaps you weren’t paying attention.

After all, Harvard University research indicates that nearly half of our waking hours are occupied with thinking about what we are not currently doing – either reflecting on the past, planning the future or mulling over things that may never happen. Modern technology has only enhanced our mind-wandering capacity. We spend over two hours a day on our smartphones on average, spread across more than 70 sessions. Nobel economist Herbert Simon observed that “a wealth of information creates a poverty of attention”. Whether it makes us happy is debatable, but information overload certainly has economic consequences.

An influx of emails and phone calls can reduce workers’ IQ by 10 points.

There has been much debate over the potentially negative impact of information overload on productivity, as opposed to the positive benefits from lower search costs. After all, productivity growth has been persistently weak across developed economies during the past decade, at a time when global smartphone shipments have increased tenfold. Information overload could damage productivity in at least two ways: the direct effects of “cyber-slacking”, and a more nebulous impact resulting from our habitually distracted minds. On the former, a recent Bank of England study cites research suggesting that an influx of emails and phone calls can reduce workers’ IQ by 10 points – equivalent to losing a night’s sleep. Presumably this is not a permanent loss, or the economy really would be in trouble.

Curiously, the same study finds that men are twice as easily distracted as women, so perhaps a better gender-balanced workforce is the answer. Other suggested remedies include “single-tasking”, as a way of avoiding employees focusing insufficiently on multiple, simultaneous tasks. Mindfulness courses could encourage us all to live more in the present. Search engines are also making an effort to create better-targeted outputs by taking account of more personal information. Whether any of these solutions will have a meaningful impact on our productivity performance remains to be seen.

Self-control also plays a role in coping with information overload. “Rational inattention (RI) theory” recognises that information may be fully and freely available, but it is costly to process. Decision-makers – whether investors, firms or households – therefore make up their minds based on incomplete knowledge, picking and choosing the information they believe is likely to be of most value to them. The economic consequences may be less obvious than for productivity growth, but they are just as powerful.

Take the case of supermarket special offers. Have you ever wondered why some items on supermarket shelves are subject to temporary, eye-catching discounts, followed by extended periods of higher, stable pricing? This observation is at odds with mainstream theory, which tends to focus on prices changing sluggishly over time. RI theory has an answer. Stores want to attract the attention of information-overloaded customers to temporary price cuts, but are perfectly happy if distracted shoppers then maintain their purchasing habit when items return to full price.

Equally, RI theory provides an explanation for the observation that business cycles tend to be asymmetric. In a “typical” cycle, output contracts faster in the downturn phase than it expands during the upturn. Because individuals focus on partial information, based on their interests and concerns, risk aversion may lead them to respond more quickly to negative news than positive – perhaps tightening the household purse strings more quickly than they would be willing to loosen them. So if central banks were to calibrate their responses to cyclical variations using mainstream models (which tend to have symmetric structures), RI theory suggests they risk over-estimating the positive impulse from interest-rate cuts and under-estimating the contractionary effect of rate rises.

RI theory also has implications for policymakers’ communication strategies. Central bankers have sometimes expressed concern that financial markets misinterpret, or over-interpret, their policy announcements. Just look at Federal Reserve (Fed) Chair Yellen’s comments on the “dot plot” chart accompanying the Fed’s regular monetary-policy announcements. Could this be an argument for central banks providing very limited guidance, since “information overload” increases the risk of over-reaction? That was certainly the thinking in the era of Fed Chair Alan Greenspan. From an RI perspective, however, Mr Greenspan’s strategy was mistaken. Market participants are likely to study every nuance of whatever the central bank supplies, filling in any “blanks” themselves. The general public, on the other hand, could rationally “value” detailed communication far less, process it in a more perfunctory fashion (if at all), and make sizeable errors in the process – so potentially knocking off course the central bank’s policy intentions. In the era of inflation reports and inflation targeting, however, central banks have responded to these RI considerations by communicating in a two-tiered fashion: a simplified summary of the economic and policy outlook for public consumption, and a more detailed description for those with the incentive to read it.

So if you missed it in 2017, how should you celebrate Information Overload Day this year? First, stop checking your phone every time it pings. Resist responding to text messages and calls, and step away from your internet browser. Information Overload Day is apparently about taking control of the flow of information into your life, limiting it where necessary. Bored yet?