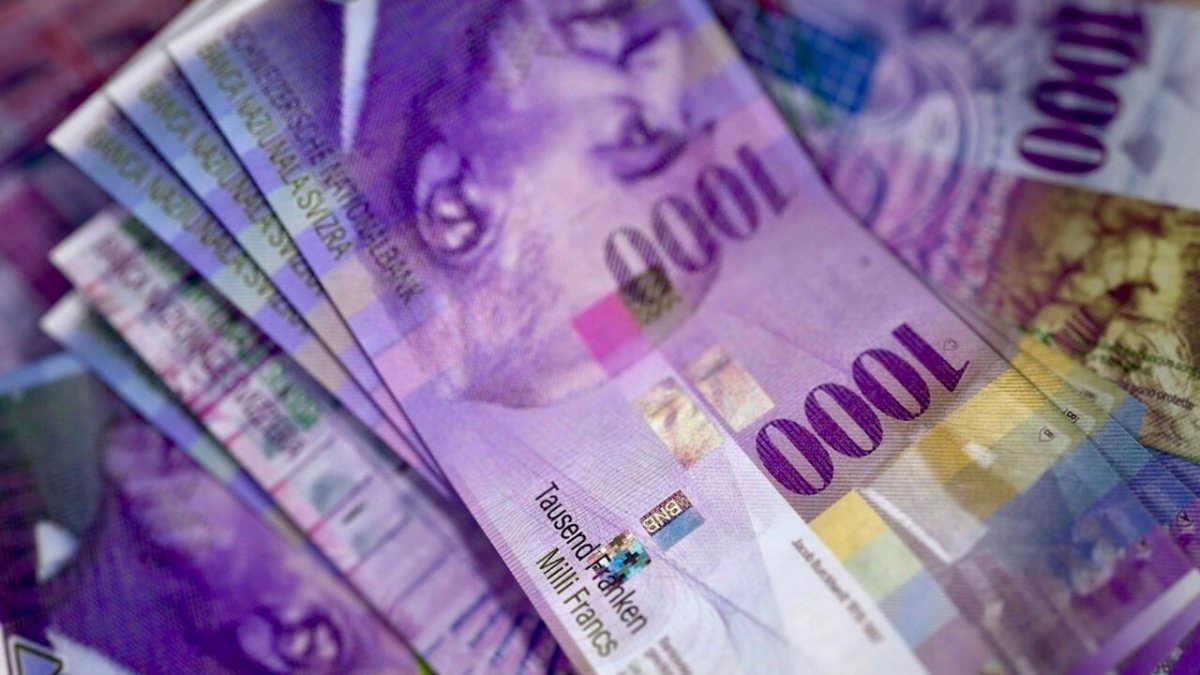 Last month, the Swiss unveiled a smart new banknote to stash in their wallets. The purple 1,000 franc bill was the latest in the Swiss National Bank (SNB) series to undergo a revamp. The new note is slightly smaller and shows two people shaking hands above a globe; the theme is communicative flair, according to the SNB.

And this is no ordinary note, it’s one of the world’s most valuable banknotes, worth around 880 euros ($1,007, £764). According to the SNB’s latest figures there are more than 48 million of them in circulation, accounting for around 60% of the value of all banknotes in Switzerland.

Discussing the new note in early March, SNB Vice-Chairman Fritz Zurbruegg described cash for the Swiss as a “cultural phenomenon” and said the 1,000 franc note “corresponds to what people want”. It was popular for high-value purchases and paying bills at the post office, as well as being “a store of value”, he added.

In Switzerland, cash remains the dominant payment method. Here, there’s an assumption everyone carries cash, even in an increasingly digital economy. Most don’t get caught out buying a sandwich or paying for a haircut when the card payment machine is out of order.

An SNB Survey in 2017 looking at the payment behaviour of 2,000 Swiss participants found that they made 70% of their transactions in cash. Debit cards accounted for another 22%, followed by credit cards at 5%. Innovative methods like payment apps and contactless card payments performed much more modestly.

Yet a 2018 report by the Bank for International Settlements (BIS) says that globally many payments traditionally made in cash are going electronic. While neighbours like Germany seem to share Switzerland’s affinity for cash, other European nations like Sweden and The Netherlands are moving much more rapidly away from it.

Why then do the Swiss prefer cash? Two simple reasons are that cash is widely considered to be part of their culture and people believe that using it allows them to track their spending more easily.

Yet despite the entrenched popularity of cash, use of mobile payment apps such as TWINT or V Pay is starting to grow. Research conducted in 2017 concluded the proportion of Swiss consumers using mobile payment on an occasional basis was set to increase.

It’s a point reiterated by Miguel Brendl, a psychologist and marketing professor at the University of Basel. “Lay wisdom suggests spending a virtual franc can feel as if you are spending less than when spending a physical franc, but even if this is true, and it may well be true, this alone is not sufficient to explain why a society would favour cash,” he comments.

There’s also the identity factor: the Swiss identify with cash in part because of how they see themselves. This is a nation which values privacy and doesn’t like being told what to do. They see themselves as different to their European neighbours and closely guard those traditions which set them apart, such as languages, political system and currency.

Neighbours point out that high-value notes help criminals launder money: 17 of the 19 Eurozone central banks have agreed to stop producing 500 euro notes to help curb crime, and Germany’s Bundesbank and the Austrian National Bank are soon to follow suit.

High denomination notes also make it easier to withdraw large sums from bank accounts, in particular towards the end of the year when the Swiss must declare their wealth on their bank statements. Fritz Zurbruegg rejected the idea that the 1,000-franc note was used more often than others by criminals, but accepted that while shoppers’ demand for cash increases at Christmas, it could also be because “studies also show other factors like possible tax evasion”.

Patrick Comboeuf of the Institute of Digital Business at HWZ University of Applied Sciences in Zurich and board member of Fintechrockers, a think tank created by a diverse group of activists, believes that Switzerland will move away from cash in time.

“The biggest lever towards a more efficient adoption of cashless payments is a top-notch user experience. Unfortunately, this is also the most neglected in any of the concepts available in Switzerland today,” he says. But he believes the digital era is shifting power from the financial services industry to consumers, leading to a greater focus on customer service.

Cryptocurrency and blockchain technology remain hot topics for Swiss start-ups and established companies alike, and a recent study by Lucerne University found that Swiss fintech growth accelerated significantly in 2018 both in terms of the number of companies and the venture capital invested.

Jonathan Rea, CEO of Foinder, a Swiss-based business consultancy, believes any mass adoption of a cryptocurrency as a replacement for day-to-day transactions is at least a decade away. “For mass adoption to take place it depends on the trade-off between privacy, convenience, self-identity and the perceived value of cash as a protection against going into debt,” he says.

For now, many Swiss still value the anonymity and freedom that cash affords them. The new notes are making their way out into the world. Simply put, they are items of beauty. That’s if you can keep them in your wallet long enough.