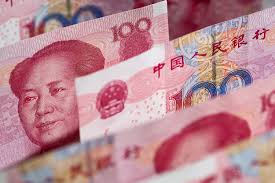 The Chinese onshore yuan weakened to a new level for 2019 on Monday, after comments from China’s central bank governor and unexpected trade data dragged on the currency.

Although the offshore trade, which is subject to less control by Chinese authorities, was off its intra-day weak point of 6.9619 from last Friday, it was still substantially higher than its levels around 6.92 for much of last week.

“There is obviously a link between the trade war and the movements of renminbi,” Yi told Bloomberg, adding that “a little flexibility” in the yuan was good for the economy.

A weaker yuan makes Chinese exports more attractive, giving them a competitive advantage in international markets, in addition to offsetting the costs of tariffs on Chinese goods.

Investors have been keeping a close watch on the Chinese yuan because it is seen as a key indicator amid the intensifying U.S.-China trade war. Many are focused on whether it will breach the historically significant 7-yuan-per-dollar level.

The yuan has been testing that level as the trade war between the world’s two largest economies deteriorated in recent weeks.

Since U.S. President Donald Trump raised tariffs on $200 billion worth of Chinese goods on May 6, both the offshore and onshore yuan have weakened more than 2%.

Jameel Ahmad, global head of currency strategy at FXTM, told CNBC: “The region between 6.90-7 in the Yuan has historically been seen as a sensitive level for the currency. However, some of the recent tone that has been presented to the market has suggested currency weakness is not seen as such a sensitive subject in China as we have been accustomed to in the past.”

With the yuan not rebounding from losses, he added that “speculation is increasing that the bias from Chinese authorities could change in the light of prolonged trade tensions.”

Meanwhile, China’s official trade data for May came in on Monday, showing that imports were worse than expected, but its trade surplus with the U.S. nevertheless widened from April.

China’s General Administration of Customs said that exports in May inched up 1.1% year-on-year, while imports fell 8.5% during the same period — potentially signaling weak domestic consumption.

China’s trade surplus with the U.S. rose further to $26.89 billion in May from $21.01 billion in April, Chinese customs data showed.

“Today’s weak trade data out of China was a stark reminder, not only to China but also to the rest of Asia, that Fed cut hopes could not eclipse Trump’s tariff threat, ” he told CNBC in an email.